BUCK: Let’s start with Nancy Pelosi letting everybody know that you gotta wear a mask in the House.

PELOSI: Consistent with the newly updated guidance from the Office of the Attending Physician relating to the increased threat from the Delta variant of the virus, the chair wishes to inform all members and staff that masks, once again, will be required in the hall of the House. However, members will be permitted to remove their mask temporarily while under recognition.

BUCK: Oh, I guess they’re supposed to be thankful for that —

BUCK: — that they don’t have to speak to address the American people. Remember, everybody that we’re talking about here in the House, you would think at this point, have they had a chance to get vaccinated? So what are they so worried about? What is the big concern for them? The Democrats all parade around that they have all been vaccinated.

I’m sure none of them have been vaccinated and have been sick. Clay, from the very early days, it was clear this would be become a political signifier. Now I think we can just see that the mask is the MAGA hat, so to speak, of the left. It has been for a long time, and it’s also an excuse for wielding power in very troubling ways. They’re going to arrest right now. That’s the rule: $500 fines for members of Congress who violate the mask mandate, and they can even arrest — Capitol Hill police, the Praetorian Guard of Pelosi — anybody in the Gallery or any staff who don’t wear the mask.

CLAY: I don’t know how this ends. But we’ve been talking, Buck, about what resistance to mask mandates should look like for much of our audience. And the perspective has been, “Hey, defy, but don’t get arrested.” Do we feel differently if you are a member of the House of Representatives? Because I kind of do. I kind of feel like it’s doing your duty in some level to force the House police to arrest you.

Is that a crazy position to be put in? Because I don’t know what actually happens. Okay. It’s a $500 fine. Well, what happens if you still refuse to wear a mask? I’m saying, “Look, I don’t want somebody who is unvaccinated, to do it,” because I think it’s bad optics. But I think if there are members of the House Republican caucus, who have been vaccinated, who may have been vaccinated and already have covid.

If they want to say, “I’m going to refuse to wear a mask, because I’m going to follow the guidance, that the CDC put out just two months ago that the White House publicized in an effort to try to get as many people vaccinated as possible. I followed your advice. I did what the CDC said. I did what the White House said. And now you’re telling me that I have to wear a mask, even though I’ve been vaccinated, even though I might have already had covid?

“I’m willing to be arrested,” because, Buck, I’m not sure procedurally where this goes from there. What if they refuse to pay the $500 fine? Are they banned from entering the House floor? Does the speaker have authority over something such as this, to disallow a democratically elected member of Congress to do his or her job over whether or not they’re wearing masks? This is a big question. And let me just say here. What if Nancy Pelosi decided that you had to wear a Cat in the Hat hat in order to speak in the House of Representatives. That would sound like a ridiculous request.

CLAY: Where does her authority, in other words, end? And I’m just tossing out of ridiculous hyperbolic example. If I were a member of the House, I had been vaccinated, and I already had covid potentially, I’m defying this. I don’t want someone who hasn’t been vaccinated to defy this, because the optics aren’t as good then. But if you follow the White House’s advice, the CDC’s advice, why is it suddenly being changed?

Are you as fascinated as me as to how this would play out, if a member — and by the way, we have Kevin McCarthy, who is the minority leader, on in the second hour. Maybe he knows the answer to some of these questions. I’m really genuinely intrigued from the legal perspective where this will go.

BUCK: Well, I’m also intrigued about what this means for mandates around the rest of the country and Democrat Party being completely insane. What happens on Capitol Hill, obviously, is political theater. But it has implications well beyond that. You mentioned Kevin McCarthy. He’ll be joining us today in the second hour of the show. So definitely stay around for that, and here he is, saying that the Capitol Hill police have been ordered to arrest people on this mask nonsense.

This is a little bit like, “We’re going to come up with these completely absurd, arbitrary designations for what is acceptable and safe conduct,” when even beyond, Clay, that the basics here of, “Why now?” there’s, “Why ever?” Why was this ever a thing that we did, and that we allowed to happen? Mask mandates were dumb all along, even Fauci knew it, and now they pretend like they can bring them back with us all admitting that this is somehow the right thing to do? I don’t think so.

CLAY: That’s why I want members of the House to defy this rule, potentially get arrested, and see what the procedural posture becomes. Because there is legitimately (chuckling) no scientific evidence that it’s supporting the idea that if you were vaccinated, you need to be wearing a mask inside. In fact, if you look at Dr. Marty Makary (I believe that’s how you pronounce his name) who is doing an incredible job at Johns Hopkins, he said as much, that there is no one out there that can point to studies to back up the new CDC mask mandate. Listen to him.

MCKARY: No, it hasn’t, and we have no studies at all for this mask guidance. I would love to see the data. You know, we are supposed to be “following the science.” Dr. Walensky cited some cases of transmissions among vaccinated people. Was that one? Was it 50? Was it a thousand? Out of $42 billion, that the NIH spends on research, we have zeros studies that were funded to look at masks on schools, yet we put restrictions on 50 million kids for a year and a half.

BUCK: This is critical too. Where are the mask studies?

BUCK: On a baseline level, where is the effectiveness of this as a tool for controlling the pandemic? The reason why we don’t have that data front and center is because they can’t compile it because it doesn’t exist. That’s number one. Beyond that, we’ve reached that phase, Clay, of this whole thing, where we know we can’t trust their judgment about what’s reasonable risk. 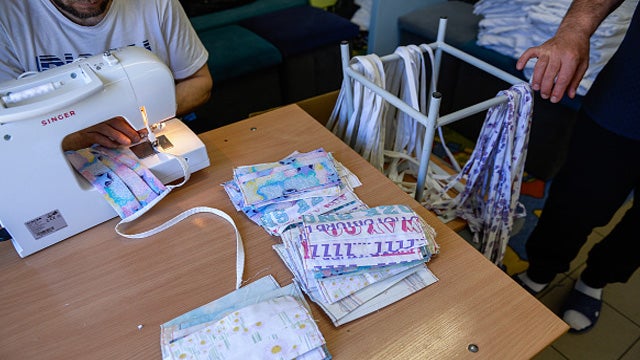 We know we can’t trust that this isn’t highly politicized and anybody who isn’t recognizing that at this stage is just delusional quite honestly. I mean, they’re talking about the risk of children. Rochelle Walensky, the CDC director, brought up how they were doing this mask mandate because it was more dangerous by some number than the flu to children.

I said, “Wait. I thought we all agreed and understood this is basically not a danger to children,” but they sepak out of both sides of their mouth all the time, because what they’ve told us hasn’t worked. And now they’re desperate to maintain the control that they had in telling us to do the things that were ineffective at controlling, never mind, stopping covid.

CLAY: Are you with me on the arrest side for the House of Representatives? Let’s pretend you or I were in the House right now, representing the Republican caucus. We had already been vaccinated. My position would be that I’m not going to wear a mask, and that I am going to require them to arrest me to send a message. I think this is different. I don’t want people going into Target or something to be getting arrested over whether you should be wearing a mask.

But your representatives are supposed to defend your interests. To me, this is a very valid way to get arrested by refusing to comply with a rule that makes no sense. That to your point, Buck, is going to be used as evidence of why mask mandates should be implemented all the way down. If they accept the cosmetic theater in the House, then your employer might require it as well. This is an important thing that they can stand on in my mind.

BUCK: And just the fact that you’ve taken off while you speak. This reminds me of when I was on that fateful flight that I told everybody about here, when they kicked three people off the flight. They delayed the flight almost an hour to kick them off.

BUCK: And the airline attendant, who was so furious about the mask noncompliance pulled her mask down at the front of the plane for about five minutes —

BUCK: — to shout about the mask mandate. At some level, the stupidity here absolutely deserves ridicule. It deserves mockery at this point.

BUCK: We’re beyond, we have a difference of opinion on this. They are living in fantasy land with this bullcrap. We can all see it. But there’s also the lust for power behind this and the ability to control people and the fear. And they don’t want to let that go either.

CLAY: No. And, look, I think you and I are both saying, “Hey, don’t refuse to wear a mask on an airplane, and cause a one-hour delay.” You have to do I; I have to do it. I’m flying to Las Vegas later on this afternoon. I’m going to have to wear a mask to be on my airplane. I think it’s stupid. I think it’s worthless. But I’m not going to delay the flight or get kicked off and not be able to fly.

But if I were a House of Representatives member right now, representing people all over the country who are having to comply with this idiocy, I would force Nancy Pelosi’s police to arrest me, if I had done the research to know, as well what the procedural posture is going forward. In other words, does the Speaker of the House have to justify her rules with science? Does there have to be some indication or evidence of why she’s changing the rules back? Because if I’m vaccinated and I already complied with the initial CDC rule, this doesn’t make any sense at all.